Each week, New World Medical wants to recognize an ophthalmologist who makes a positive impact to benefit humanity. This week, we recognize Dr. Joseph Panarelli. 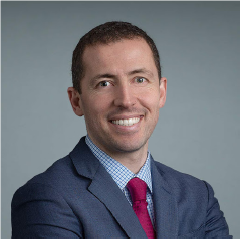 Dr. Joseph Panarelli, Associate Professor, Department of Ophthalmology, NYU Langone Health, volunteered his time as a front-line worker in New York during the COVID-19 pandemic. During this time, the state was experiencing the peak of the crisis, and struggled to handle the surge in cases. Hospitals were short staffed and functioning at 150% of capacity. A COVID-19 response army was assembled at NYU Langone consisting of volunteer physicians with specialties unrelated to the virus: ophthalmology, endocrinology, rheumatology, etc. He was part of the first wave of volunteers and worked for two weeks, non-stop, for twelve hours each day – eight days volunteering and six days treating glaucoma patients.

On his first day, he didn’t know what to expect. Immediately upon arrival, he was handed patients with serious illnesses that he had not treated in over twelve years, since his med school days: heart failure, sepsis and COVID-19 patients who didn’t require ICU care. Initially frightened and intimidated, Dr. Panarelli had to re-learn the ins and outs of practicing medicine on the floor at the same time as treating patients. In order to do this, he attended midday training lectures in the middle of his patient schedules. Additionally, he served as his own boss since the hospital was short staffed. During training, the COVID-19 unit stood out to him. COVID-19 patients’ doors were closed, and on the door hung a checklist consisting of vitals, oxygen levels and codes allowing for patient monitoring while minimizing the spread of the virus.

Day two was filled with fear and hesitation. The CDC started reporting that the virus was attacking young people. Being young himself, and exposed to the virus every day, the fear of catching COVID-19 and spreading it to his family was at the forefront of his mind, yet he continued to volunteer. His daily routine consisted of admitting new patients, treating them, overseeing discharge plans and ensuring communication occurred with their family. Normally, families were able to sit in waiting rooms, but due to the outbreak, they were not even allowed in the hospital. This was eye-opening for him, and he knew the stress that family members were going through since they could not be present, so he made it a top priority to spend quality time communicating with patients’ families.

On day three, his children woke up just to say “Daddy, we are proud of you”. Overcome with emotion and bearing the weight of the responsibility he had towards his family, he cried on the way to the hospital. This internal struggle dissipated as soon as he stepped back on the hospital floor; he was reminded of why he became a doctor, and those reasons were to save lives and protect patients. This pushed him forward and kept him focused on treating his patients and discharging those that could leave so that their exposure was minimized. Each day ended upon arriving home, where he spent an additional hour thoroughly disinfecting himself and his belongings in order to keep his family safe.

Days 5, 6, 7, 12 and 14 were spent treating urgent glaucoma patients back in the ophthalmology department in NYU. He treated about 3-4 patients a week to ensure that those who were on the verge of losing their sight received immediate care.

Throughout the two weeks. Dr. Panarelli received a tremendous amount of support from the medical teams on the floor, consisting of volunteer nurses, nurse managers, nurse practitioners, administrators and physicians like himself, who flew out on their own dime to join the cause. His gratitude extends to the janitorial staff who exposed themselves everyday by constantly cleaning the equipment and rooms that patients stayed in, and to the valet staff who kept the flow of patients and staff moving.

He was also overtaken with the overwhelming generosity that the public displayed. Coffee shop employees refused to take his payment for coffee, and kids left notes in chalk outside the hospital, thanking people like himself for the work that they were doing.

Dr. Panarelli will never forget this emotional experience. He is extremely grateful to his wife for her support of him in his decision and appreciates his family more than ever.

IN THE ENVIRONMENT OF THE EYE,
AS YOU WOULD A DELICATE NATURAL ECOSYSTEM

LEAVE ONLY YOUR BEST WORK BEHIND